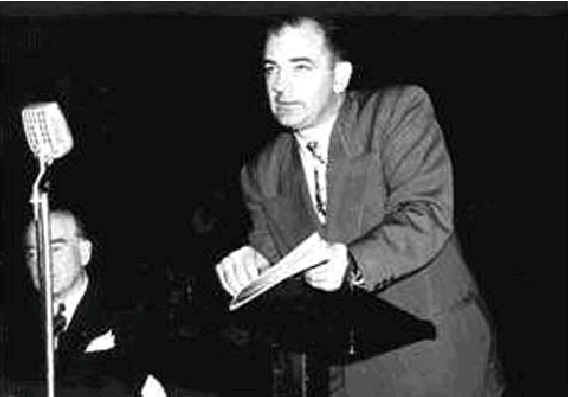 His Biggest Crime? Making It Possible for Totalitarians
to Portray Themselves as Civil Libertarians

I’ve been a fan of Stephen Hunter, film critic at the Washington Post, for some time. I’ve always found his reviews to be helpful guides to films. More than that, however, they’re well crafted essays on interesting subjects. (His review of “Downfall,” the outstanding film starring the incomparable Bruno Ganz that chronicled the last days of the man who plunged Europe into war and genocide, is a good example: “Hitler in the Berlin Bunker: An Eerie, Chilling ‘Downfall’.”)

But now Hunter has gone and mentioned the unmentionable in a review of a movie about the nefarious Joseph McCarthy: “‘Good Night’: A Gray Era In Stark Black And White.” How long can he last as a respected film critic?

(It’s astonishing how the issue of the very real communist threat to liberty over a period of many decades–fortunately now behind us–has been occluded by the reckless behavior of the senator from Wisconsin. I find that when I mention in a talk that so-and-so was or is an outspoken Communist [or communist], I have to mention that I’m not red-baiting, because so-and-so actively called for establishing the dictatorship fo the proletariat and abolishing private ownership of the means of production, or was a membership of the Communist Party. A simple statement of fact is generally considered evidence of vicious “red-baiting.” The propagandists for the cause of communism did a truly brilliant job and the effects are still with us. Let’s hope that, with the USSR now dead and buried, this particular bit of dishonesty can be uncovered for what it was and is: an attempt to mask a movement for mass murder and total dictatorship as a kind of harmless lifestyle that was persecuted by fanatics whose crimes [such as denying work to intellectual thugs like the wealthy Dalton Trumbo] were far worse than anything ever contemplated by the harmless communist intellectuals, who merely wanted to liquidate much of the population and plunge the rest into a long night of tyranny and poverty.)

5 Responses to “How Tasteless! Mentioning Historical Truth when Reviewing a Film…”