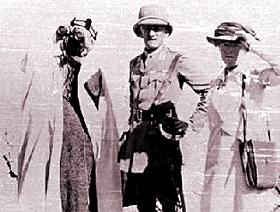 Today’s Washington Post (requires simple registration) has an elegantly written essay on an architect of Iraq, Gertrude Bell, “The Woman Who Put Iraq on the Map: Gertrude Bell, Resting in Relative Peace.” The author is intent on drawing attention to parallels with today’s events in Iraq. She’s good at it:

The names and families have held through the decades. Bell’s Baghdad landlord was from the Chalabi family, the key minister in the Iraq government was Jafar, and Britain’s nemesis in Iraq was a scowling young Shiite cleric named Sadr.

“The vilain [sic] of the piece is Saiyid Muhammad Sadr, the son of old Saiyid Hasan Sadr,” she wrote home. “. . . Saiyid Muhammad was the man who first received us, a tall black bearded alim with a sinister expression. At the time you and I paid our call, Saiyid Muhammad was little more than the son of Saiyid Hasan, but a month later he leapt into an evil prominence as the chief agitator in the disturbances. He has still a certain amount of influence and it’s a hand to hand conflict between us and him. He is in a black rage and I feel as if we were struggling against the powers of evil in the dark. You never know what Shi’ahs are up to.”

“Father, isn’t it wonderfully interesting to be watching over the fortunes of this new state!” she felt optimistic enough to tack on.