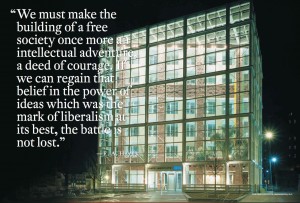 Over 200 former Cato interns (I think the number was 220) converged on the Cato Institute’s headquarters from all over the country (and some from Latin America, Europe, and Asia) to take part in the first reunion of Cato Institute interns. David Boaz gave an inspiring call to arms Friday evening in Cato’s winter garden, followed by a trek of attendees to a local watering hole to reminisce. Former interns from the 1980s, 1990s, and the 2000s were there, and I was there from the “Class of ’78.” I gave the opening remarks at the meeting in the F. A. Hayek Auditorium the next morning (after working until 2:20 am on projects, and getting up at 7:00 to write my remarks; old college habits never die). My remarks follow: