Kyrgyz libertarians are leading a series of coordinated voluntary efforts to provide emergency aid to the victims of the vicious attacks of the last few days in their country and to promote peace throughout the nation and the region. I’ve been in regular touch with our friends there, and on Tuesday evening I talked to Central Asian Free Market Institute (CAFMI) Director Mirsulzhan Namazaliev by Skype, as he was interrupted by a stream of volunteers working late into the night in the CAFMI offices. He made their resolution clear:

“We are helping those who are suffering, but we are doing more. For me personally this is not only a fight for life. It is a fight for freedom. We don’t want to be ruled by any authoritarian Central Asian or Russian regimes that would exploit this awful violence. The violence we are suffering is a provocation designed to generate chaos and to overturn the chance for a constitutional regime. We will not stand for it. We want peace, we want freedom, and we want a lawful government.”

I was in Kyrgyzstan just last month to work with CAFMI and with the new acting minister of economic development, my friend Emil Umetaliev, a founding member of CAFMI’s board of directors. (CAFMI was founded by two Cato graduates, former Cato intern Seyitbek Usmanov and Cato University graduate Mirsulzhan Namazaliev.) There was guarded optimism about the country’s future, after the corrupt and increasingly authoritarian regime of Kurmanbek Bakiyev was ousted in an uprising after he tried to suppress demonstrations with deadly force. But there was also fear of Bakiyev’s machinations, especially after the revelation of a recorded cell phone conversation between his son, Maksim, and his brother Janybek (who had given the orders to shoot protesters in April), in which they clearly plot violence to derail a new constitutional process and regain power, even proposing how many “fighters” to hire, arming them with iron bars and other implements, and how much to pay them to launch attacks. The recording was chilling. And with the money they looted from the country, they found the thugs to launch attacks on both Uzbek and Kyrgyz villages, in order to spark revenge attacks. Their plans bore fruit this month, as hundreds were murdered, homes and businesses were burned, and between 80,000 and 100,000 people were made refugees.

As Namazaliev put it to me, “We will not stand for it.”

The “I want Peace in Kyrgyzstan” campaign has five coordinated elements:

1. Use cell phones, databases, and the internet to organize volunteers effectively and to create and disseminate maps (using Google Maps and other techniques) to guide deliveries of aid to victims and to help people to avoid areas in turmoil, burning buildings, and road blocks and ambushes set up by thugs.

2. Create a modern campaign for peace in three languages (Kyrygz, Uzbek, and Russian) – with a brand, a logo, street graffiti, slogans, t-shirts, stickers, leaflets, hand-written letters from children, radio interviews and public announcements, text messages, and other means to calm tensions and promote peace. Representatives of the various ethnic groups appear together to pledge peace and to build the rule of law and freedom together.

3. Combat disinformation and misinformation that might fuel ethnic hatred and violence, and respond rapidly to malicious rumors and hate campaigns before they bear their evil fruit.

4. Contain the spread of reprisals and hatred throughout Central Asia, by providing reliable information to media, helping to combat ethnic smears and suppress revenge attacks against minorities in other countries, and quickly rebutting calls in nearby countries for military intervention into Kyrgyzstan, which carries the very real danger of regional war.

5. Create a “Peace Room” (not a “War Room”) in CAFMI’s Bishkek offices to be open 24 hours a day to coordinate the collection and dissemination of information. Volunteers in the Peace Room utilize cell phones, social networking sites, twitter, text messages, phone trees, and more and monitor mass media constantly. The CAFMI office is now fully staffed with volunteers and working around the clock.

The young volunteers and staff of CAFMI are donating their time, risking their lives, and contributing their scarce resources, in a country with a per-capita income of about $2,100. If you’d like to stand with a group of very brave, very determined, and very committed libertarians to stop the violence in their country, provide emergency aid to the victims, avoid regional war, and lead the region to peace and freedom, you can send a tax-deductible donation to the Central Asian Free Market Institute (CAFMI) through the Atlas Economic Research Foundation, which has provided support to CAFMI. Please write to Erin.Grant@AtlasNetwork.org and 100% of your donation will be dedicated to CAFMI’s work in Central Asia. Even small donations will help. It would be a decision you would not regret. (You can follow CAFMI’s work on their Facebook page and Namazaliev writes in Russian and in English on NewEurasia.net, Twitter, and other media. He covered the April uprising against Bakiyev’s authoritarian regime in The Independent and was quoted frequently by CNN and many other news organizations.) 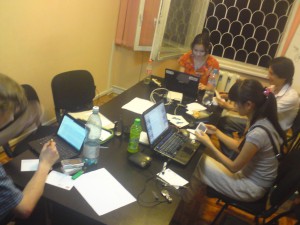 2 Responses to “Libertarians in Kyrgyzstan Spearhead Peace Campaign, Help Victims of Violence: You Can Help, Too”