The referendum is about to begin in Kyrgyzstan, to choose a new constitution which, despite its flaws, will put greater limits on presidential power and, it is hoped, avoid authoritarianism and promote civil peace. Young people around the country, organized by the Central Asian Free Market Institute and similar civil society groups, are working to promote peace and suppress hatred, revenge, and violence. The shirts (see below) say on the front “I Want Peace in Kyrgyzstan” in Uzbek, Kyrgyz, and Russian, and on the back, “One Homeland! One People! One Future!,” also in Uzbek, Kyrgyz, and Russian.

The libertarians in Central Asia are planning to open an office in Osh, as well, to promote peace, liberty, and limited government in the area that has seen so much deliberately provoked violence by people who prefer force and power to persuasion and freedom. It’s not too late to make a modest donation to make that possible. (Ten dollars actually buys something there, and no donation is too small.) Click here for the information. We’ve already raised a few thousand dollars, enough to pay to open the office and equip it, just from Facebook and a few notes, mostly in small donations. Every penny helps! 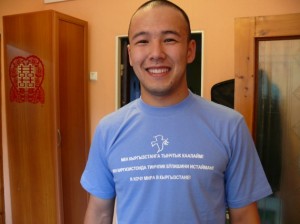 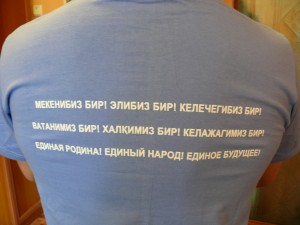