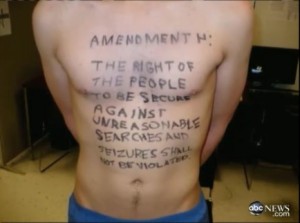 I’m referring to the shocking display (ABC News clip here) of the so-called “Fourth Amendment” to the so-called “Constitution of the United States of America” being written by a man on what he evidently considers his “own chest.”* How sick can you get? Next it’ll be the so-called “First Amendment” to defend his filthy “right” to express his ideas. Not in this country!

*Scholar’s note: On the relationship between self-proprietorship and freedom of conscience, see the discussion of Overton and other Levellers, as well as of John Locke and James Madison, in George H. Smith, “Philosophies of Toleration,” in George H. Smith (“Philosophies of Toleration,” in George H. Smith, Atheism, Ayn Rand, and Other Heresies [Buffalo: Prometheus Books, 1991]). Such “self-propriety” serves as the philosophical justification for the resister’s strategy of “going limp” when arrested by state agents, as Overton argued in refusing to walk to prison when ordered to do so: “My Leggs were borne as free as the rest of my Body, and therefore I scorne that Leggs, or Armes, or hands of mine should do them any villeine-Service, for as I am a Freeman by birth, so I am resolved to live and dye, both in heart word and deed, in substance and in shew.” Overton was quite cruelly dragged by the hair from prison as a consequence. His remarks on this experience remind us of the clear relationship of self-propriety and moral agency: “But in case you object, that I knew well enough, that if I would not go, they would carrie me, therefore it had been better for me to have gone, then to have exposed my selfe to their cruelty, I answer, 1. If I had known they would have hanged me, must I therefore have hanged my selfe? 2. A good conscience had rather run the hazard of cruelty then to abate an hairesbreadth of contestation and opposition against illegality, injustice, and tyranny. 3. If they had had any legall jurisdiction over my leggs, then at their Commands my leggs were bound to obey: And then, (in that case) I confesse it had been better to obey, then to have exposed my person to the cruelty of threatening mercilesse Gaolers: But being free from their Jurisdiction from the Crowne of my head to the Soale of my foote, I know no reason, why I should foote it for them, or in any the least dance any attendance to their Arbitrary Warrants; their Lordships may put up their pipes, except they will play to the good old tune of the Law of the Land, otherwise their Orders and Warrants are never like to have the service of my leggs or feet, for they were never bred to tread in their Arbitrary Steps, but I shall leave their Orders and their execution to themselves. And therefore, Sir, concerning that action of mine, I shall continue in the said esteeme thereof, till my defense be made voide, and it be legally proved, that by the Law of the Land, I was bound to set one legge before another in attendance to that Order.” [Overton, Richard “The Commoner’s Complaint,” in Overton, Richard, “The Commoner’s Complaint,” Tracts on Liberty in the Puritan Revolution, 1638-1647, Vol. III, W. Haller, ed. (New York: Columbia University Press, 1943), pp. 381-382. James Madison (“Property,” National Gazette, March 27, 1792, The Papers of James Madison, R. A. Rutland and others, eds. [Charlottesville: University Press of Virginia, 1983]) expressed the basis of property in conscience when he wrote, of every individual, that “He has a property of peculiar value in his religious opinions and the free communication of them.” (p. 266)