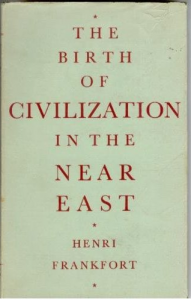 I just finished Henri Francfort’s quite interesting book The Birth of Civilization in the Near East, from which I picked up some very interesting information and ideas. The discusion of Mesopotamia was quite interesting (including the short description of Urukagina’s attack on predatory behavior by the rulers of Lagash, probably the first libertarian reform movement of recorded history), the discussion of the writing system, etc. Similarly, the treatment of Egyptian civilization was helpful, although I found the following (page numbers from undated edition from Doubleday Anchor Books, New York):

From a scribal text: “And now the scribe lands on the river bank and is about to register the harvest tax. The janitors carry staves and the Nubians (policemen) rods of palm, and they say, ‘Hand over the corn,’ though there is none. The cultivator is beaten all over, he is bound and thrown into the well, soused, and dipped head downwards. His wife has been bound in his presence, his children are in fetters. His neighbors abandon him and are fled.” (p. 105) (Francfort follows with “If such brutality had been the rule, it is clear that Egyptian society could not have survived,” but he does not suggest it was uncommon, either.)

“The upper register shows the deceased in his function as ‘Scribe of the fields of the Lord of the Two Lands.’ On the left are shown a group of his officials, dressed in white, pencase in hand, busy measuring the grain on the stalk; their attendants (with bare bodies) hold the measuring cord. A peasant (followed by his wife who carries a basked on her head with further gifts) offers something to the tax officials, to propitiate them. But on the right, before the kiosk of the tomb owner and near the mooring-place of the boat, which brought his subordinates to the scene, a peasant, who apparently defaulted, is beaten, while another kneels and prays for grace.” (p. 107)

“If officials abused their power and oppressed the people, the peasants had an effective weapon at their disposal: they fled.” (p. 115)

Interesting. Oddly, here is how Francfort concludes his study of Egypt:

“Whatever aspect of Egyptian society we have scrutinized, we have found Pharaoh at the centre. Yet nothing would be more misleading than to picture the Egyptians in abject submission to their absolute ruler. Their state can be described as ‘a self-directed organism held together by a common regard for their customary rights and obligations.’ [Footnote to F. M. Powicke, The Reformation in England, Oxford, 1941, p. 31] Their polity was not imposed but evolved from immemorial predilections, and was adhered to without protest, for almost three thousand years. Similar predilections have, in fact, maintained the institution of divine kingship among Africans related to the ancient Egyptians down to our own days. It was good, not evil; it gave a sense of security which the Asiatic contemporaries of the ancient Egyptians totally lacked. If a god had consented to guide the nation, society held a pledge that the unaccountable forces of nature would be well disposed and would bring prosperity and peace. Truth, justice, were ‘that by which the gods live,’ an essential element in the established order. Hence Pharaoh’s rule was not tyranny, nor his service slavery.” (pp. 119-120)

I try to be careful not to read back onto such different contexts and civilizations ideas and concepts that are more familiar to me, but may have been foreign to the people of the time, but the beheadings and beatings sound rather like coercion to me, and apparently were perceived as such by the people who tried to avoid them, and not very much like “a common regard for their customary rights and obligations.”

2 Responses to “Egyptian and Mesopotamian Civilization”