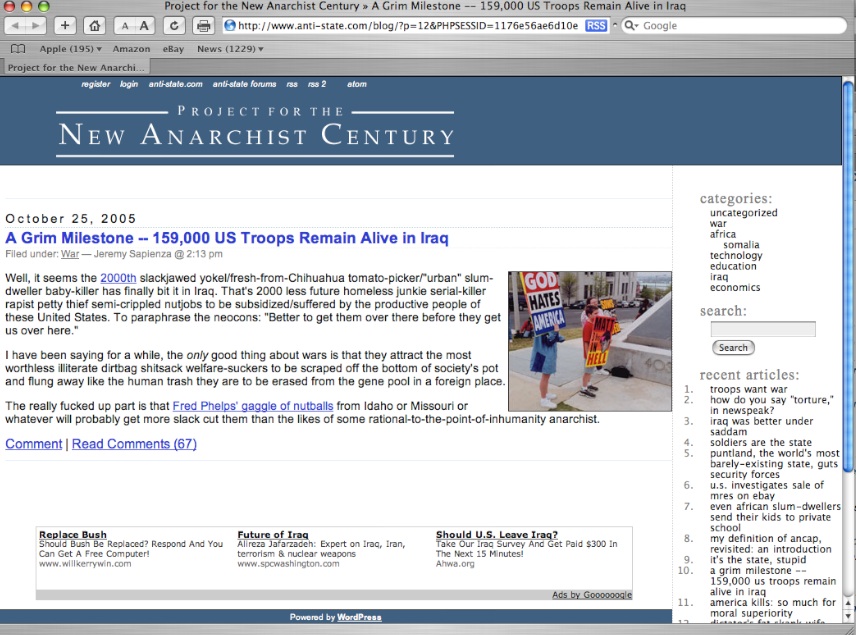 Antiwar.com Senior Editor and Lewrockwell.com Columnist Jeremy Sapienza has once again given everyone an occasion to “smear” him by…quoting him. He recently headlined an essay as follows:

Another occasion that Mr. Sapienza gave to “smear” him by quoting him was when he wrote:

“I will stand up proudly for it. I have cheered on men attacking US troops. I will continue to cheer any defeat US troops meet.”

If William Kristol and other neo-conservatives had tried to invent people to discredit their critics, they could not have done better than the kind of trash that antiwar.com and lewrockwell.com have dredged up. What a truly sickening display of how far someone can go off track — from “the state is an enemy of liberty” to “any enemy of my state is a friend of mine.”

(I mention the “smear” charge because when Mr. Sapienza is quoted, his defenders at lewrockwell.com and antiwar.com insist that such quotations — with links to his expressed opinions — are “smears.”)

UPDATE: I just had a chance to settle in to my hotel room in Portland, Oregon when I checked my email and found one insisting that Mr. Sapienza isn’t a columnist for lewrockwell.com. Sure enough, his name cannot be found on the list. I’ll respond to some of the comments later, but I did have the foresight to take a screenshot of the list of “Columnists and Commentators” before posting the column above. Here it is. And just in case Mr. Sapienza gets dropped from the masthead of the antiwar.com and sent down the memory hole, here’s a screenshot of the antiwar.com masthead taken at the same time the material above was posted. Had the neo-conservative warhawks set out to do it deliberately, it would have been an astonishing accomplishment for them to have invented personas more likely to discredit the cause of non-intervention and peace than Justin Raimondo and Jeremy Sapienza.

80 Responses to “Evil or Crazy Person “Smears” Self”