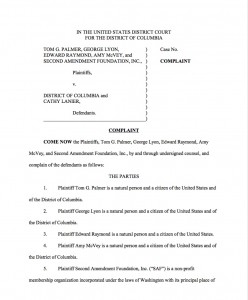 The outstanding lawyer Alan Gura, who won the case before the Supreme Court that struck down the ban on ownership of firearms in the District of Columbia today argued our case for the right, not only to “keep,” but to “bear” arms, i.e., to carry them in public. Alan’s smart and focused and we’ve got a strong case.

Cato Chairman Robert A. Levy, who funded the previous case entirely out of his own pocket, made the case for the right to carry in an article in the Washington Post last year: “Gun Owners’ Next Victory in D.C.” That’s the same Robert A. Levy who wrote “The moral and constitutional case for a right to gay marriage” for the New York Daily News earlier this month. Bob is neither a gun owner nor gay; he’s just a decent person who believes in liberty and the rule of law. Oh, and he’s brilliant, too.